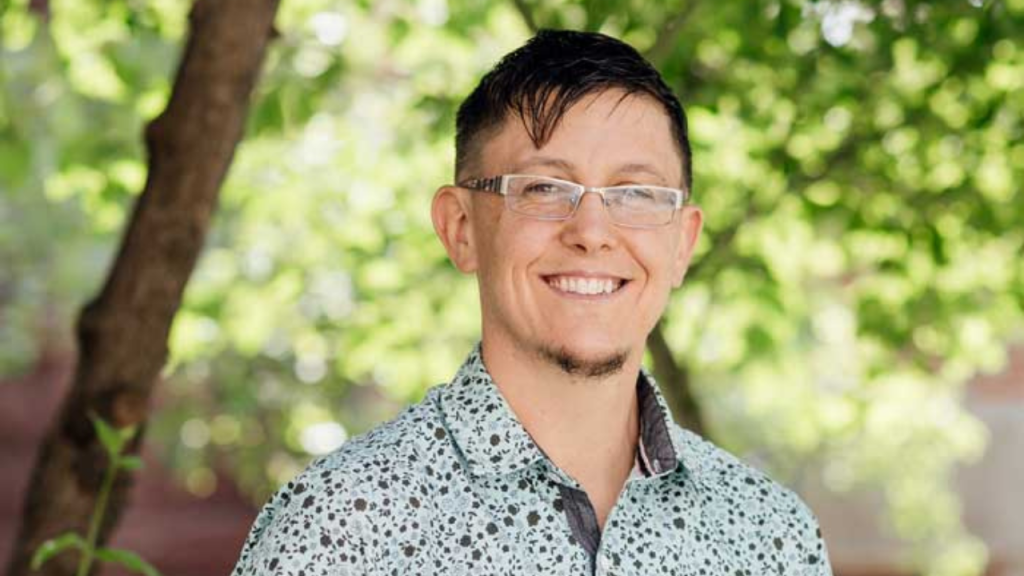 1- In less than a minute, tell us who you are and why we keep hearing good things about you.

I'm a yoga and dharma teacher and social justice educator and a lot of my work sits at that intersection of practice and social justice. I bring embodied and contemplative practice to nonprofit organizations doing justice work in order to sustain and elevate their work, and I bring diversity, equity, and inclusion trainings to yogic and dharmic institutions and organizations to ensure that our practice is contextualized in the sorrows and possibilities of the world.

2- What inspired you, if any, to join the Warrior Flow 200-Hour Yoga Training’s faculty?

I liked the format, I connected with Adrian, and wanted to pursue the opportunity to teach on my favorite topics. As a trans and queer person, I appreciated that I could teach on queerness and practicing trans justice in the yoga classroom, but not just those topics; I resist my work being pigeon-holed by my identity, and Adrian understood. I liked the deeper intention of the training that was far beyond just the postures that so commonly are understood as the whole of yoga.

3- In simple words, what does yoga mean to you?

Yoga is understanding the interconnectedness of life all of the time, everywhere, with everyone, and enhancing the ways in which our thoughts, words, and actions are truly life enhancing and not life-threathening. There is no one separate, there are no strangers, there is not suffering that I do not care about, because we are all interconnected. Any idea of separation does not serve my liberation individually or collective liberation at large. We practice the breaths, postures, meditations, and philosophies to be in alignment with life, to be protectors of all of life, from the inside out. My activism springs from that place that my practice creates within me, of deep love, undeniable truths, and fierce protection.

4- What is the main difference between learning yoga now and when you took your first yoga training?

I am always learning yoga. I am foremost a student of yoga, and consider that commitment as having the utmost importance. When I keep myself in the student's seat, I remain humble, curious, and open.

Mainstream yoga has changed in the past 25 years that I have been studying, practicing, and teaching, in that it is more open listen to the underrepresented and underestimated communities, and adapt according to the wisdom that these communities bring. It's not as difficult to find BIPOC, trans, disabled, queer, fat teachers as it once was, and we are present in yoga media and yoga spaces. And, there is a lot more work to do on this front, as many yoga spaces still replicate white supremacy, still defend sexual misconduct, and continue to foster transphobia and ableism.

5- In your opinion, why is this a key moment in time to learn yoga?

It is always a key moment to learn yoga. Because yoga is life-enhancing, and our planet and many communities are threatened and in peril, we need more people to have more tools and to practice using them more of the time.

6- Who would you be without yoga?

Probably a self-absorbed, unreflective, brazen activist who often gets in his own way and severs relationships rather than strengthening them.

7- Who were your role models? And what pushed you to learn and become who you are today?

I learned yoga and Buddhism in order to survive bullying in high school initially, and later because I wanted tools for my activist communities. I became who I am now through friendship, mentorship, healing, and the study of yoga, Buddhism, and social movements across time and space.

8- What were the pivotal roadblocks and challenges you encountered along the way that helped you define your path?

In 2006, I was fired from a natural food store run by a yoga ashram for being trans and talking about it with coworkers, asking for them to not misgender me. I learned that I was not protected in that industry as a trans person, I had no agency, even in a city like NYC that had legal protections against discrimination based on gender identity, it's difficult to prove. I also knew that many people in our economy are considered disposable like I was. Two years later, I had founded a worker-owned cooperative health center in Brooklyn, and co-owned the business with an undocumented person from Guatemala, a white gay man, a white-passing Latina, a Black queer elder, a genderqueer white person, and an immigrant from South Korea. We were all there representing and looking out for our communities, and in owning the business together, had to work out ignorance and misunderstandings that in another business could lead to someone being fired, as I had been.

Another challenge that I've had for my tenure in yoga has been mainstream yoga-that is white, cisgender, straight, hyper able-bodied, thin, and middle to upper class yoga studios, teacher trainings, and yoga service projects. I used to have my walls up, protecting myself and upset at the violence that is perpetuated even in our yoga spaces where we come to heal. I've done a lot of healing, found deep friendship and colleagueship with folks who are similarly disregarded or cut out, and found a lot of allies who use their privilege to uplift and make room for the rest of us who aren't immediately welcomed or listened to. I now have a more open heart, and have seen folks radically shift directions. I know that is possible. The question for me now, is how much time does that take, and how can I participate in a way that won't deplete me?

9- What can we all do right now to make this world a better place?

Ground yourself, build a resilient nervous system and a heart that is ready for anything, and use those tools in public. Ground yourself around people different than you. Ground yourself among people that look like you but have vastly different values and commitments. Ground your people using these yoga tools-your household, your colleagues, people in your field, people with identities you hold. Then, from that place of grounding, we won't perpetuate a lot of the violence we currently see, and we will have hearts and minds that have space to envision and imagine a better world that we all can live into.